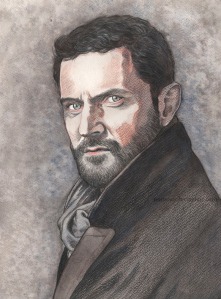 Hello there, reader!  How’s your week been?

Last night I got to see The Crucible at the Old Vic, which was excellent in many ways (Richard Armitage as John Proctor being the main one), and exhausting in others (the play finished at 11pm, and in the short time since I got home from Edinburgh Fringe I’ve lost the knack of staying out quite so late).  Arthur Miller’s retelling of the Salem Witch Trials is a fascinating story which, in its essence, examines what can happen when a lie gets spectacularly away from you.

We lie all the time, don’t we?  I’m not suggesting that we make stuff up from dawn ’til dusk every day, of course, but no one can say that they are completely truthful one hundred percent of the time.  Most of our lies are innocuous.  We exaggerate occurrences to add a bit more drama, or we tweak anecdotes to make them funnier.  Moving slightly further along the white-to-black scale of lies, we might hide certain things from loved ones because we don’t want to hurt them, or elect not to get involved with a dispute between friends when we know what actually happened.

There are two things to consider about this: first of all, when we lie in the smallest ways we are editing ourselves, and our lives warp incrementally because of this.  If we can convince ourselves and others that the funnier version of an anecdote actually happened, for example, then we are leading ourselves to believe that our lives are more artfully contrived than they actually are.  We adapt our identities in minuscule ways in order to format our experiences; we are fulfilling a role.  (I wrote an article for Miro Magazine that relates to this – give it a read and let me know what you think.)

The second thing is that we have no way of knowing what effect our lies will have.  If we choose to tell a white lie to protect someone, or hide information that we think would be upsetting, we are depriving other people of the opportunity to respond to the truth.  However good our intentions may be, if we love and respect someone we need to give them the chance to deal with the reality of a situation, even if we don’t think it will be pretty.  We would want the same thing if we were in their shoes, wouldn’t we?

The Crucible is a very extreme example of why lying is bad – people lose their dignity, reputations, property and lives because of a fiction invented by some highly-strung girls.  (It’s also not exactly a context that we can relate to: the story hinges on the fact that some girls were seen dancing in the forest, and dancing was most definitely Not Allowed in Massachussetts circa 1690.  The idea of anyone trying to stop my friends dancing circa 2014 is beyond laughable.)  Having said that, lies can have extreme consequences.  They might not result in death and defamation, but they can certainly cause long-lasting damage.

Also, don’t edit yourself when you’re telling a story.  You are wonderful just as you are, and someone who really loves you will find you hilarious, even if the anecdote isn’t actually all that.

Have a gorgeous weekend.  Make sure you get a decent lie-in at some point.