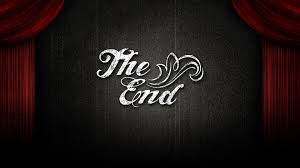 Good morning, my dear and lovely reader.  I hope that you’ve got some excellent and relaxing activities planned for your weekend.

Today is my final day of working front of house on a kids’ show in Greenwich.  In a week the show starts up again in Richmond, so I’ll be back to keeping ludicrous hours pretty soon, but for now it’s so long and thanks for all the prams.  Unfortunately, not all of my beloved colleagues are coming with the show to Surrey, so it’s goodbye to a few of them today.  After three weeks of early starts, tantrums, in jokes and camaraderie, we will be sad to see each other go.

Even though today is a bit sad, it’s also very positive: we are moving on to other things, we have all made friends whom we will keep for long time, and we are freaking knackered, so we need a break.  Like most people I am not massively fond of change, but in this case it’s ok that the end is nigh.

We don’t like the idea in general though, do we?  We don’t like to close a door on something and say that it is over.  Especially when it comes to our relationships with other people, the idea of categorically stating that we are finished feels weird, wrong and difficult.

Do you remember when you were about to leave school/college/uni?  Do you remember feeling that your time had come, that you were ready to get out there and do your own thing?  That you had taken as much as you could from a situation, and that you were now prepared to go out and do things your own way?  Right.  It’s the same with people, bizarrely.  We know when we are truly ready to end a friendship or relationship that is not good for us or has reached its natural end.  When we make a friend we tend to assume that they will be around for a long time, possibly for the rest of our lives, but it doesn’t always work out that way.  It’s nice to think that everyone in your life is there for a reason, but sometimes it seems that that reason is to give you a short, sharp shock, and then skidaddle.

I won’t tell you to live every day as though it were your last, or to treasure the people who matter to you: not because those aren’t worthy sentiments, but because you’ve heard them already.  If you’re not adhering to them by now, there’s nothing I can say to change that (except possibly bribe you with biscuits).  What I’m going to suggest is that we try to embrace the endings of things, because we never know where these endings are going to take us.  I’m also going to suggest that we make an effort to be nice to the people we care about, because we probably don’t want to face change and endings without them.

Have a spectacular Saturday.