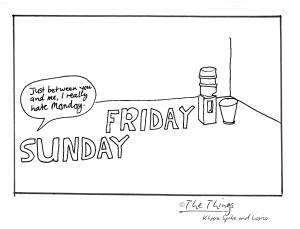 Good morning and welcome to the new week!

Lots of people hate Mondays, including Garfield, the Bangles and the Boomtown Rats.  I personally quite like them, for the same reason that I love early mornings: the potential.  The beginning of something is always full of possibilities to explore and opportunities not yet taken.  Inevitably, Mondays (and early mornings) are also riddled with moments of clumsiness, missed trains and coffee spillages, but as far as I’m concerned it’s the good stuff yet to come that’s worth thinking about.  Who knows what this week might hold?

This time of year is a bit of an odd one, because British people’s moods are almost solely dictated by the weather: some people are a bit blue because it’s so chilly and there’s a lot of damage to be fixed after the floods, whereas others are tilting their faces towards the lukewarm sunshine and thinking dreamily of summer.  It is technically British Summer Time now…but we have to show some self-control.  Put down the deck chairs; we’ve got a few months and several degrees to go.

Apparently, people have always tended to be feeling a bit extreme around this date.  Whether these were all on Mondays or just end-of-March madness we’ll never know, but let’s look at some examples:

1603: After about a year of watching her closest mates drop dead one by one, Queen Elizabeth I succumbs to peer pressure and follows suit.  After forty-four and a half years on the throne she must be knackered, poor thing.

1832: Mormon Joseph Smith is beaten, tarred and feathered in Ohio.  I know I should be appalled by that, but actually it just made me giggle.  It’s the idea of a religious fanatic running around covered in feathers; how on earth could anyone take that zealous lunatic seriously after that?

1837: Canada gives black people the right to vote.  This is pretty amazing, especially when you consider the fact that America took another thirty-three years and a civil war to come to the same decision.  Good for you, Canada.

1882: German scientist Robert Koch announces the discovery of the bacterium that causes tuberculosis.  The disease has been considered hereditary until this point, but Koch’s work discovers the truth (and wins him a Nobel prize in 1905, and undoubtedly saves a heck of a lot of lives).

1906: A census of the British Empire reveals that Britain rules a fifth of the world.  Slightly awkward to look back at now, but is beautifully summarised by this Eddie Izzard clip.

1972: Northern Ireland’s Parliament is suspended after the prime minister resigns.  Britain’s direct rule over Northern Ireland is introduced.  This is just getting embarrassing.

1973: This one isn’t an example of March madness by any means, but on this day The Big Bang Theory star Jim Parsons is born.  He is looking very well for someone who hit the big four-one today, I must say.

I hope you enjoyed your miniature history lesson.  May your Monday turn out to contain all sorts of amazing things, such as the legendary all-chocolate Kit Kat.